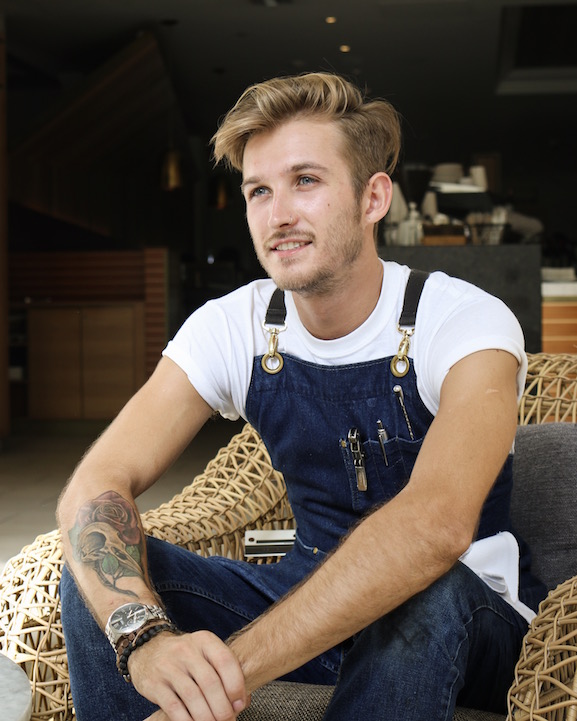 It’s that time of the year again when all the talented culinary and bartending pros within Marriott International compete for the coveted “Master of the Craft” title. Last year, we were overjoyed when our very own Sherene Hutchison competed against 2,200 chefs in the Americas and came out #1 by impressing the judges with a dish that included pan seared salmon, roasted pumpkin purée with lemon, roasted zucchini and gremolata.

The “Masters of the Craft,” which is an internal competition of Marriott International, involves notable chefs and mixologists facing off “Iron Chef style” by creating their best concoctions from unique ingredients. Sherene has certainly set the bar high for the 2019 contenders, but we are super excited about the two F&B extraordinaires who are representing Anchor & Den at this year’s prestigious competition.

Jordan’s bartending journey started more than six years ago in the UK, when he was looking at ways to help him finance his years in University studying music. His first bar experience was on Brighton Pier, just pouring pints for a summer. This sparked Jordan’s curiosity and encouraged him to study and learn about all aspects of bartending; from recipes and techniques to duties and liquor laws.

What he learned he was able to put into practice as he took up bartending in other venues across Brighton. His eventual foray into freelance bartending and teaching provided him with the opportunity to meet people outside of a bar environment.

His musical and artistic background has definitely inspired his cocktail offering and he has developed a passion for using unusual ingredients, which many would think would be impossible to use in cocktails.

Here, we speak to Jordan about his interesting introduction into the world of cocktail making, the inspiration behind his Valley of the Bee cocktail for the Masters of the Craft Competition and what he loves about being part of the A&D team.

A&D: How did you make your start in bartending?

JC: I started in Brighton, in the South East of the UK, about six years ago. I was studying music down there and I needed extra money as it is a really expensive city. It is quite an artistic place and there are a lot of students there. So I started bartending at a place on Brighton Pier. After my contract was up there, I started working at a bar called The Font, which was an old church. Based on the aesthetics alone, you can base a whole Beverage program on the surroundings. I was there for about a year. I was a Chef and Bartender there. Learning skills as a Chef really helped me improve on my bartending skills because I gained new techniques as well. It was a very high speed environment because you had to make the drinks so fast. Then I went to this place called Medusa Bar, which was a tiny wine bar. I really focused on making classic cocktails – it was a great introduction as they had quite a condensed cocktail list. And I started experimenting there. After that I started freelance bartending and teaching at parties for a great company called Mr. Bartender. So I got to travel around the UK doing that. It was a great opportunity to work in different contexts and meet new people.

At the same time, I was doing session work as a musician. I think music and drinking are quite interlinked so there was some crossover for inspiration. For instance, I have used songs and lyrics to name some of my cocktails.

A&D: What made you fall in love with the profession?

JC: I like the creativity that is involved and the different ways that you interact with different kinds of people. In the UK, bartending is very different to what it is in the US and Cayman – it is perceived differently. This is also the first time that I worked at a bar in a hotel. You are exposed to people from all over; which makes it more interesting.

A&D: What was the inspiration behind your cocktail choice for the Masters of the Craft competition?

JC: It was actually quite selfish; I just really liked it! There is one cocktail that I am in love with and it is a variation of what is called The Penicillin. It has Glenfiddich Scotch, ginger (which is one of my favourite ingredients) and a natural fresh honey to add some variety to the background. I wanted to make it visually striking so added the sweetness and colour of Midori Sour. It makes it a vibrant green colour. I wanted to have two halves of the drink so I decided to shake separately. One half is egg white and it kind of tastes like a key lime pie with a smoky, ginger base. It is called the Valley of the Bee. I liked the idea of the freshness and colour of a valley.

There are a lot of opportunities to create new cocktails, like during our Night Market events or for instance at special events like the Rituals of Hanami, which I designed the cocktail program for.

A&D: What do you love about being part of the A&D team?

JC: I work with quite a unique team. Everyone has their own techniques from different places so it is interesting what I learn from them. We feed off each other and it balances the team as everyone is different and brings something unique to the table; like sharing techniques and ingredients that we may have been unaware of before and can now experiment with.

A&D: What are you excited about for your future of cocktail making?

JC: Now that I have been introduced to the competition side, I am really looking forward to what that holds. I am used to the performance side of the competition because of my musician background. I am quite used to it but when it comes to public speaking in front of a large group, I am still working on building my confidence. It is a challenge but I like learning new things.